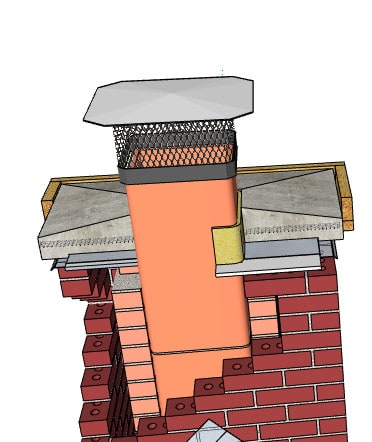 Chimney crowns are one of the most important components of a chimney, yet they are often the most improperly constructed as well. A chimney crown is concrete you may see on top of your chimney, and it covers the brickwork that encases the chimney liner, preventing water from pouring into the air space between your flue tiles and the brick exterior of your chimney.

A properly constructed chimney crown will have a drip edge, which is a 2-inch overhang level with, or just beneath, the crown that helps to deposit rainwater away from the sides of the chimney, and an expansion joint that allows the liner to thermally expand and contract. A large percentage of the chimney crowns we inspect are improperly constructed, and the crown is formed directly around the top flue tile, bonding the crown to the top of the flue liner. The bottom of the flue liner sits on the brickwork at the top of the smoke chamber, so having the crown attached to the flue tile at the top prevents the liner from expanding evenly at the top and the bottom. This results in damage to the joints between the flue liners, and it also will cause the tiles to offset. Once that happens, you have openings in your liner, which can allow smoke and gasses to exit back into the chimney, while also leading to drafting issues.

This offsetting of flue tiles usually occurs when the tiles press against each other and the mason who constructed the chimney placed masonry chips between the joints to help align the chimney as it rose during construction. Another problem that we often see in chimneys with a crown bonded to the top flue tile is that flue tile will expand through the chimney crown and cause the masonry to crack. This can result in the chimney crown leaking, which can eventually damage liner joints, smoke chambers, and even the firebox itself.

So, what do you do if you have a cracked crown? Many in the industry would simply recommend repairing the crown to prevent water entry. However, that still does not address the actual problem; the crown is still bonded to the flue tile and will still restrict thermal expansion. It can cause future damage to the chimney liner, chimney joints, and the crown. Is removing the entire crown and rebuilding completely necessary? If we encounter a cracked chimney crown that has a corbeled drip edge, then we will recommend cutting the crown around the liner to allow for thermal expansion, fill the gap with non-combustible resilient sealant and repair the crown to keep it watertight.

If the chimney does not have a corbeled drip edge, then we recommend a complete replacement with a code-compliant ASTM 1283 crown. Ultimately, the goal is to have a crown that allows the flue liner to freely expand and contract, prevents water from entering down the chase, and has a drip edge to prevent water from damaging the exterior brick.